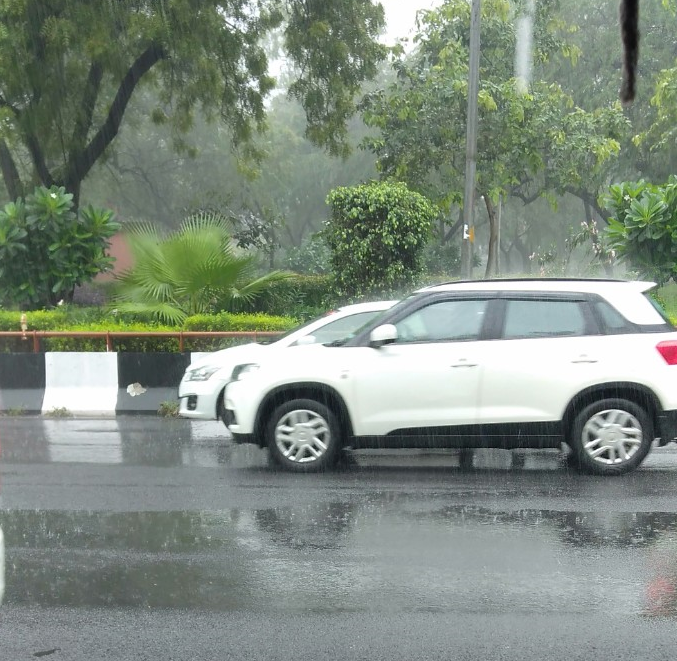 Rain in parts of Delhi, maximum temperature settles at 33.6 degree celsius: Parts of Delhi received rainfall even as the mercury in the national capital settled at 33.6 degree Celsius, officials said. The relative humidity was recorded at 70 percent around 6 pm, according to the India Meteorological Department (IMD).

Light rains were reported in south Delhi areas like East of Kailash and Lajpat Nagar, and at Shahdara and Laxmi Nagar in east Delhi. Parts of Noida and Gurgaon also received rainfall.

Mercury rose by a notch in the national capital on Tuesday morning, with the minimum temperature settling at 28.6 degrees Celsius earlier in the day, officials said. The relative humidity in the morning was recorded at 86 per cent, according to the IMD.

According to the Meteorological Centre, Jaipur, the low-pressure area has formed over Orissa and the surrounding area. The Monsoon Trough Line is also passing through its normal position, weather officials said.

Due to its effect, the monsoon will be active in most parts of the state in the coming days and heavy rain is expected at isolated places in the districts of Udaipur, Jodhpur and Kota divisions.

The districts where heavy to very heavy rain is likely, include Udaipur, Banswara, Dungarpur and Chittorgarh, officials said. Another new low-pressure area is likely to form in the Bay of Bengal around September 11, they said.

During the last 24 hours, 10 cm rain was recorded in Gogunda in Udaipur; 5 cm each in Jodhpur’s Shergarh, Makrana of Nagaur, Dhorimanna of Barmer; and 4 cm in Badesar of Chittorgarh, they added. Various places recorded 1 to 3 cm rainfall.

Telangana govt takes up relief measures in rain-hit localities: The Telangana government shifted residents to safer places at some localities and initiated other relief measures after incessant rains led to the flooding of low-lying areas or water-logging on the roads in several districts.

Official sources said 219 people were shifted to safer places in the Rajanna-Sircilla district following flooding and water-logging. State Civil Supplies Minister Gangula Kamalakar, who visited the rain-hit areas in Karimnagar, said the administration has taken up measures to drain the water from water-logged localities.

State Women and Child Welfare Minister Satyavati Rathod, who held a teleconference with the Collectors of Mahabubabad, Mulugu and Bhupalpalli districts, asked officials to be alert and take up appropriate relief measures.

Incessant rains since the last about three days led to the flooding of low-lying areas in several districts, including Rajanna-Sircilla, Karimnagar, Nizamabad.

Six drown amid heavy rains in Vidarbha: Six persons have swept away in floods amid heavy rainfall in Gondia and Yavatmal districts of Maharashtra’s Vidarbha region, an official said.

A group of eight to 10 men had gone to Dhubad ghat area to bathe in Bagh River in Amgaon tehsil, where four of them were swept away by strong currents in the afternoon, Gondia district disaster management officer Rajan Choubey said.

A rescue team immediately reached the spot and launched a search operation, which was stopped later due to poor light, the official said. In a similar incident, two men were swept away when they tried to cross an overflowing bridge at Vasant Nagar on Digras road in Yavatmal, an official said.

The body of one of the victims identified as Gyaneshwar Yadav was fished out, he said. Thunderstorms with lightning and heavy to light rainfall have been reported in parts of the Vidarbha, including Yavatmal and Gondia districts.

At least 50 circles, including 28 in Nanded, two in Parbhani and 20 from Hingoli, received over 65 mm rains in 24 hours ending on Tuesday morning, the official said.

According to the district administration in Nanded, two bullocks were struck by lightning in Pota village of Himayatnagar taluka, while three cattle drowned in floods.

Heavy rain lashes 11 Odisha districts as IMD forecasts formation of fresh low-pressure area: Low pressure-induced heavy rainfall lashed 11 districts of Odisha as the Met Department forecast the formation of a fresh depression over the Bay of Bengal around September 11.

The weatherman issued a “yellow” warning (be updated) for 14 districts in south and coastal Odisha and warned fishermen against venturing into the sea on Wednesday.

Two places – Banki in Cuttack district and Khandapara in Nayagarh – received very heavy rainfall of 140 mm and 117.4 mm respectively in 24 hours till 8.30 AM on Tuesday, the India Meteorological Department (IMD) said.

“A fresh #Low Pressure Are is likely to form over #North and adjoining #Central #BayofBengal around #11th September 2021,” The MeT Centre in Bhubaneswar tweeted.

Rain washes out road at Ranipokhri, Uttarakhand: An alternative road built over Jakhan river at Ranipokhri between Dehradun and Rishikesh was washed out following heavy rains.

The road was built for commuters and light vehicles recently after a bridge on the Dehradun-Rishikesh highway was damaged due to incessant rains last month.

However, heavy rains washed out the alternative road on Tuesday morning, Dehradun District Magistrate R Rajesh  Kumar said. The PWD has begun its efforts to reopen the road and hopefully, traffic will be restored along the route in 24 hours, he said.

For the time being, the traffic between Rishikesh and Dehradun continues through Nepali farm, he added. The alternative road was built when two slabs of a 56-year-old bridge on the Jakhan river caved in following heavy rains on August 27.

Thane, Palghar citizens asked to remain alert as MeT office forecasts heavy rain: The Thane and neighbouring Palghar administrations have asked citizens to remain alert in the wake of heavy rainfall prediction by the Regional Meteorological Centre for the Konkan region over the next three days.