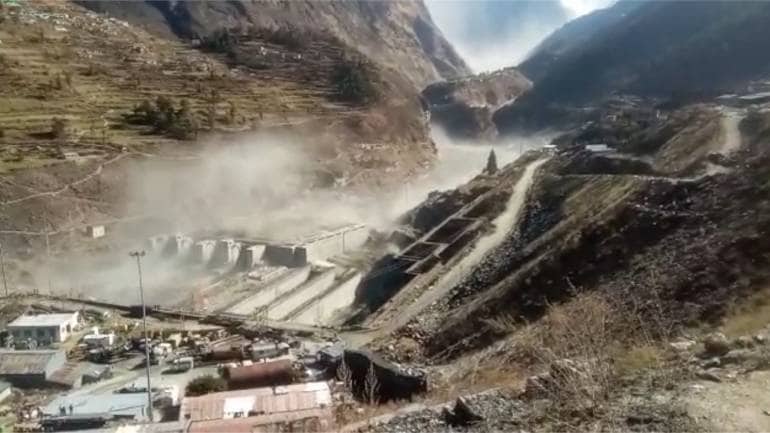 Over 150 people are feared dead due to a flash flood, following a glacier coming apart and an avalanche on the Alaknanda river in Chamoli, Uttarakhand. The accident caused damages to four hydropower projects in the area.

Local reports suggested workers of the NTPC-owned Tapovan Vishnugad hydropower plant were stuck in it owing to the flash flood, but 16 of them have been rescued. Statements from the state government said a glacier broke in Joshimath.

Chief Minister T S Rawat on Twitter said: “All the rescue teams are doing their best to save lives of missing workers at NTPC (140 nos) & Rishi Ganga (17 nos).”

A public statement by NTPC said: “An avalanche near Tapovan in Uttarakhand has damaged a part of our under-construction hydropower project in the region. While rescue operations are on, the situation is being monitored….”

The privately owned Rishi Ganga power project (130 Mw), which is on the upper stream of the Alaknanda river, was the first to face the brunt of the avalanche. The debris from this plant caused damage to other units downstream.

Sources said apart from Tapovan (520 Mw), Pipal Koti (4×111 Mw), the hydro project of state-owned THDC, and Vishnuprayag (400 Mw) of Jaypee Group also faced damages. NHPC, the country’s largest hydro power developer, in a statement said it did not have hydro projects in the area of distress and its power stations were safe.

The office of the chief minister said: “The flow from the Tehri dam was stopped to facilitate smooth passage of rising waters on RishiGanga & Alaknanda. All the villages & low lying areas on the banks were vacated & water flow from Srinagar dam was increased to manage higher water flows due to disaster.” The flow from the Bhagirathi river was stopped. The state government has asked the Srinagar and Rishikesh dams to be emptied to halt the flow of the Alaknanda.

The police, army, Indo-Tibetan Border Police, and the State Disaster Relief Force are on the spot.

Experts have called for extreme caution now when awarding infrastructure projects in the area.

“This is not a wake-up call but an attempt to stop a running man and telling him you are running wrong. The coffer dam (Chamoli) itself had broken three times. This incident can happen again. If the data was not available, the why make this dam? It is the liability of the decision makers. It is a criminal offence,” said Vimal Bhai of the Matu Jan Sanghthan, an NGO working on adverse effects of large hydro and infrastructure projects in the region.

In June 2013, heavy rain, coupled with flash floods in several areas in Uttarakhand, killed over 5,000 people and caused major damages to villages, livestock and dams.

The Union Ministry of Water Resources, River Development and Ganga Rejuvenation in 2016 filed an affidavit in the Supreme Court, saying several mountainous areas such as Uttarakhand should be left untouched. It said dams and river water diversions had caused significant damage to the river length and destroyed the original content and quality of the river downstream.