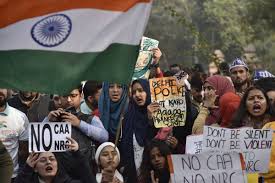 Police used tear gas to disperse large crowds in India’s capital of New Delhi on Sunday in the latest eruption of violence at protests over a new citizenship law, police officials said.

Hundreds of people supporting the new law clashed with those opposing it, with the two groups pelting each other with stones in the Maujpur area in the northeastern part of the city, according to television footage.

“There must be some miscreants who want to spoil the peace in the area. We will identify them and take action against them,” Alok Kumar, a senior Delhi police official, told reporters about the protest.

The protest comes just a day before U.S. President Donald Trump begins a two-day visit to India, where he is expected to raise the issue of religious freedom in the country with Prime Minister Narendra Modi.

The Indian law is seen by opponents as discriminating against Muslims and has deepened concerns that Modi’s administration is undermining India’s secular traditions.

On Sunday, a separate protest also erupted in the northern Indian city of Aligarh, where protesters threw stones at the police, state administration said.