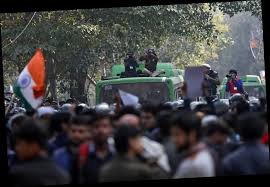 When artist Rachita Taneja heads out to protest in New Delhi, she covers her face with a pollution mask, a hoodie or a scarf to reduce the risk of being identified by police facial recognition software.

Police in the Indian capital and the northern state of Uttar Pradesh – both hotbeds of dissent – have used the technology during protests that have raged since mid-December against a new citizenship law that critics say marginalises Muslims.

Activists are worried about insufficient regulation around the new technology, amid what they say is a crackdown on dissent under Prime Minister Narendra Modi, whose Hindu nationalist agenda has gathered pace since his re-election in May.

“I do not know what they are going to do with my data,” said Taneja, 28, who created a popular online cartoon about cheap ways for protesters to hide their faces. “We need to protect ourselves, given how this government cracks down.”

Critics also accuse authorities of secrecy – highlighting, for instance, that the software’s use during Delhi protests was first revealed by the Indian Express newspaper.

India’s home ministry did not immediately respond to requests for comment on facial recognition technology.

Modi’s government has rejected accusations of abuse during demonstrations, and accused some protesters of stoking violence.

A spokesman for his ruling Bharatiya Janata Party had no immediate comment on concerns over the use of the technology and referred questions to the government.

But police said worries about facial recognition were unwarranted.

When it comes to surveillance, India trails far behind neighbouring China. New Delhi, for example, has about 0.9 CCTV cameras for every 100 people, versus about 11.3 per 100 in China’s commercial hub of Shanghai, a 2019 report by PreciseSecurity.com showed.