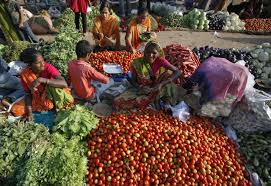 India’s rural inflation rate surged faster than urban inflation for the first time in 19 months in January, and economists are optimistic that signals something the country desperately needs – a revival in demand in the rural economy.

Around two-thirds of India’s population depends on the rural sector with agriculture accounting for near 15% of India’s $2.8 trillion economy, and rising inflation suggests pricing power is returning to the hands of the farmers, say economists.

“This augurs well for farmers’ cash flows in the coming months. I expect early signs of demand revival to emerge from the rural belts, going ahead,” Experts said .

Rural inflation rose to 7.73% in January, higher than the urban inflation rate – which was 7.39% – for the first time since June 2018. The latest data, released on Wednesday, also showed that overall inflation was 7.59% – its highest level in more than six years.

While the higher inflation readout, which comes at a time when India’s growth has likely slumped to 11-year lows, has fanned some concerns around stagflation, economists say the inflation numbers could also signal some momentum returning to rural growth.

Rural inflation has been falling over the last year and half as a lack of proper infrastructure for storage and transport had left rural India with a glut of grains and the floods in several states in 2019 made matters worse for goods transportation.

This could bring a glimmer of good news for the government, which has been trying to revive growth and boost consumption.

In its budget earlier this month, the government allocated 5.6% higher spends on agriculture and allied activities for the fiscal year 2020/21, as it seeks to kick-start demand.