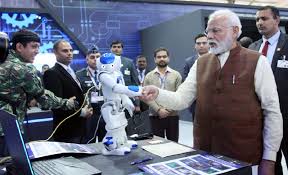 India wants to double defence exports over the next five years, Prime Minister Narendra Modi said on Wednesday, as the country seeks to cut its import bill amid a funding crunch that has forced successive governments to go slow on new orders.

“For several years India has been a net importer of defence products. We have taken measures to change it since 2014,” Modi said in the city of Lucknow, addressing the inaugural ceremony of India’s 11th defence expo.

The exports, primarily made by government ordnance factories and private firms such as L&T, Bharat Forge and Tata group, include offshore patrol vessels, helicopters, coastal surveillance systems and spares for radar.

India’s armed forces, saddled with outdated aircraft and warships, are in dire need of funds for modernisation.

Laxman Behera, research fellow at Institute for Defence Studies and Analyses, said in a report released on Tuesday that India’s defence resource crunch had been acute in recent years.