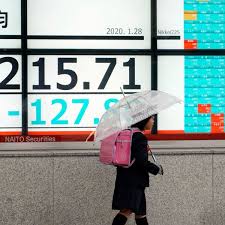 The Federal Reserve left interest rates unchanged and signaled that it would continue with its repo funding through the second quarter of the year.

The Fed’s unchanged stance on monetary policy arrived as the busiest day of earnings unfolded.

Apple  closed at record highs, up 2%, after its earnings topped estimates a day earlier.

GE  delivered a beat on both the top and bottom lines, led by strength in its aviation business, sending its share price 10% higher. The company also reported free cash flow of $3.9 billion, exceeding its target for the full-year.

Boeing  shrugged off weaker-than-expected earnings, rising about 2%, as the aircraft maker posted its first annual loss in more than decades, owing to losses from the grounding of its 737 Max jets.