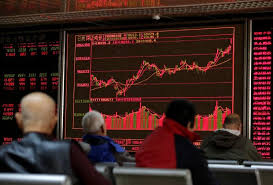 Asian shares and U.S. stocks fell on Thursday as investors remained anxious about the spread of a new flu-like virus in China just as millions prepared to travel for the Lunar New Year.

Oil futures tumbled to seven-week lows as the contagion was expected to hit airline travel, while the International Energy Agency’s warning of an oil surplus and a larger-than-expected increase in U.S. crude inventories re-kindled fears of excess supply.

The Chinese yuan fell toward a two-week low, while safe-havens such as the Japanese yen, gold, and U.S. Treasuries rose before a travel blockade of the Chinese city, Wuhan, at the centre of the outbreak starts later on Thursday.

The S&P 500 eked out a 0.03% gain on Wednesday, but the overall tone on Wall Street was mixed as investors assessed the impact of the virus and braced for the corporate earnings season.